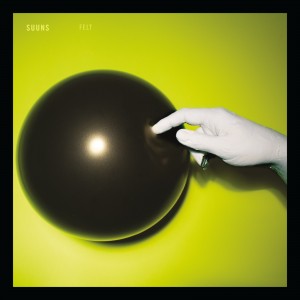 Suuns are pleased to announced their new album, Felt, coming out March 2nd on Secretly Canadian. Singer/guitarist Ben Shemie says, “This record is definitely looser than our last one [2016’s Hold/Still]. It’s not as clinical. There’s more swagger.” You can hear this freedom flowing through the 11 tracks on Felt. It’s both a continuation and rebirth, the Montreal quartet returning to beloved local facility Breakglass Studios (where they cut their first two albums [Zeroes QC and Images Du Futur] with Jace Lasek of The Besnard Lakes) but this time recording themselves at their own pace, over five fertile sessions spanning several months. A simultaneous stretching out and honing in, mixed to audiophile perfection by St Vincent producer John Congleton (helmer of Hold/Still), who flew up especially from Dallas to deploy his award-winning skills in situ.

Complementing O’Neill are the ecstatic, Harmonia-meets-Game Boy patterns unleashed by electronics mastermind Max Henry. Eschewing presets, Henry devised fresh sounds for each song on Felt while also becoming a default musical director, orchestrating patches and oscillations. Quietly enthusing about “freaky post-techno” and Frank Ocean’s use of space, he’s among your more modest studio desk jockeys: “Yeah, I sat in the control room while the others played – hitting ‘record’ and ‘stop’. It also gave me the flexibility to move parts around and play with effects. I do have a sweet tooth for pop music.”