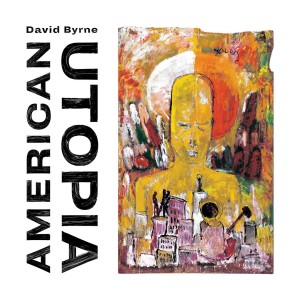 American Utopia fits hand-in-hand with Byrne’s vision for his series ‘Reasons To Be Cheerful’ - an ongoing series curated by Byrne of hopeful writings, photos, music, and lectures – named for the song by the late Ian Dury. Over the last year, Byrne has been collecting stories, news, ideas, and other items that all either embody or identify examples of things that inspire optimism, such as a tech breakthrough, a musical act, a new idea in urban planning or transportation – something seen, heard, or tasted. Just as the album questions the current state of society while offering solace through song, the content of the series recognizes the darkness and complexity of today while showcasing alternatives to the despair that threatens us.

While David Byrne has collaborated on joint releases with Eno, Norman Cook (aka Fatboy Slim), and most recently St. Vincent over the past decade, American Utopia is Byrne’s first solo album since, 2004’s Grown Backwards, also on Nonesuch. American Utopia morphed during the writing and recording process, beginning with longtime collaborator Eno, and eventually growing to include collaboration with producer Rodaidh McDonald (The xx, King Krule, Sampha, Savages) alongside a diverse cast of creative contributors including Daniel Lopatin (aka Oneohtrix Point Never), Jam City, Thomas Bartlett (St. Vincent producer, aka Doveman), Jack Peñate, and others. The album was recorded in New York City at David’s home studio, Reservoir Studios, Oscilloscope, XL Studios, and Crowdspacer Studio and in London at Livingston Studio 1.

Speaking about the album, Byrne said:
Is this meant ironically? Is it a joke? Do I mean this seriously? In what way? Am I referring to the past or the future? Is it personal or political?

These songs don’t describe an imaginary or possibly impossible place but rather attempt to depict the world we live in now. Many of us, I suspect, are not satisfied with that world – the world we have made for ourselves. We look around and we ask ourselves – well, does it have to be like this? Is there another way? These songs are about that looking and that asking.

This album is indirectly about those aspirational impulses. Sometimes to describe is to reveal, to see other possibilities. To ask a question is to begin the process of looking for an answer. To be descriptive is also to be prescriptive, in a way. The act of asking is a big step. The songs are sincere – the title is not ironic. The title refers not to a specific utopia, but rather to our longing, frustration, aspirations, fears, and hopes regarding what could be possible, what else is possible. The description, the discontent and the desire – I have a feeling that is what these songs touch on.

I have no prescriptions or surefire answers, but I sense that I am not the only one looking and asking, wondering and still holding onto some tiny bit of hope, unwilling to succumb entirely to despair or cynicism.

It’s not easy, but music helps. Music is a kind of model – it often tells us or points us toward how we can be.

Barry says: From what I garner from reading Byrne's comments on his newest release, he is commenting (possibly) sarcastically on the duality of American life... or possibly he wasn't. What is less ambiguous is just listening to the album, taking in the excellently written songs and the latent, wry politicism peppered throughout. It's wonderful, that's all you need to know.