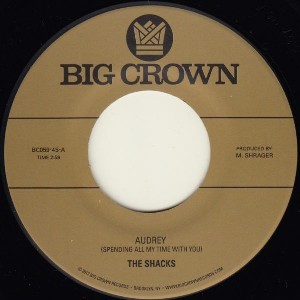 Before the release of their debut album, we are dropping one more 45 with a newly recorded version of “Audrey Hepburn," a tune off their self titled EP from 2016 and “Fly Fishing", a B side exclusive to this single. For most of 2017, The Shacks have been honing their skills as a live band playing in and around NYC as well as opening for bands like Chicano Batman and Khurangbin. Some of their studio creations which favor the soft, dream pop side of their repitoire, have been reworked for the live show setting. Audrey Hepburn (Spending All My Time) is an example of that. When we first heard their reworked version at a gig in Brooklyn, we called them the next day and asked them to cut to tape the way they had switched it up for the live set.

The result is this catchy single, so strong we had to press a 45 for it. The B Side, “Fly Fishing” is one of many tracks The Shacks have sitting in the vault. Constantly writing and recording, the group has amassed a huge catalog of music. Fly Fishing starts out with a raucous syncopated intro dropping into a floaty groove The Shacks are know for. It's also their drummer's grandma's favorite song.

A-Side: Audrey (Spending All My Time With You)

The ShacksMy Name Is... / Sand Song