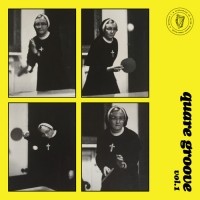 A long time in the making – Quare Groove Vol. 1 – Sounds of the Irish musical underground from the 70s & 80s..Spread across 2 12s with extensive liner notes on printed inner sleeves. Re-mastered with care by Shawn @ Optimum.
.
Stating it softly..... Irish music of the 1970's was simply not synonymous with groove music in any way. Avid music aficionado's were totally 'rockist' then (to use an old tag from the same time!) That thread tends to follow with record collecting of vintage Irish music of that time, down to this day. We'll throw a little change into that narrative here - the groove is very rare, and not a little quare! We've looked at the entire recorded music picture of what happened here on this little island into the 1980's, and we're bringing back this -----

We can't tell you that this music comes from a strange place - it comes from a steadily steep and VERY strange place! A small place that was not a little conflicted societally and politically back then - and in every way too, public and private. However it was also a time of great change. Living through it seemed like a rite of passage that moved off from some manner of dark age, and then over forward into a brighter light. Modernity beckoned, and not just with the technology!

So what can you hear here? It's no coincidence that this music also makes a similar coming of age. Recording techniques were wholly embraced here, in this era. Late 1970's Irish music saw sound engineering and music production artistry advance from previous, and in a very big way. As studio's moved away from simple and straight audio captures, the music really benefitted. So what can you hear here? We're bringing you two sides of this story on two big black twelve inch slates. The first slate has an abundantly sweet clubbier sound of past-funk groove music. The second slate gives you an edgier angle of what the post-punkers got up to, after they too got their hands on the same danceflooring. This is really but only the beginning: There's so much more to come!