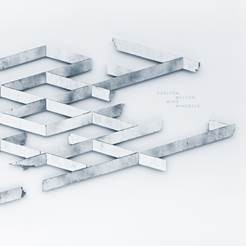 This will be Carlton Melton's first full length release since 2015’s widely lauded “Out To Sea” double opus, itself a languid drifting of drones and psychedically enhanced riffmongering. Sure, there's been some long EP releases since.. .Hidden Lights in 2017 (featuring the immeasurable drone sike float on “Rememory”) and Aground in 2016 (a companion, the Desert Island weather beaten psych-flow follow up to Out To Sea), now it’s time to soak up...Mind Minerals.

Mind Minerals finds Carlton Melton in fine fettle, all the songs were recorded and engineered at El Studio in San Francisco by Phil Manley on September 3rd and 4th 2016 (except 'untimely' - recorded at the Dome by Brian McDougall), the studio setting suits them -- a logical progression from a weekend’s recording out at the Dome.

Under Manly’s watchful ear/eye, Carlton Melton have created a futurescape soundtrack..,a “3001 Space Oddyssey”. The drums are more pounding and direct than before, the constantly re-assuring bass creates a helping hand to propel you through the clouds of static and shards of electrifying guitar dazzling your horizon. Synths help soothe the sharp edges and lull you into some out of body experience whilst and orchestrated calamitous scree pulls you back…. This is a breathless, yet deep breathing album. It demands full immersion...

Searing guitar piercing the drone with relentless power, the core trio of Carlton Melton; Andy Duvall (drums/guitar), Clint Golden (bass guitar), and Rich Millman ( guitar/synth), have some alchemical bond that’s helped them create a post-rock / psychedelic / freeform organic slab of American Primitivism / space drift , this is unashamed head-music from the melting pot of Northern California.. 5 decades ago this album would have been released on the ESP Disk Label or even Apple…there would have been no helter skelter if the desert Hippies had locked onto these vibes, plug in, turn on, tune out..float free.. Carlton Melton can provide your own aural microdose to reset your Mind / Psyche!!

All songs mastered by John Mcbain at JPM mastering.
Cover artwork is “Walls” (2013) by Andy Vogt.

Barry says: Hypnotic swells of strummed guitars, camouflaged with the scream of a thousand delays fighting a thousand reverbs in space, breaking out into beautifully languid streaks of light in an otherwise foreboding musical landscape. Beautiful, ambient bliss.