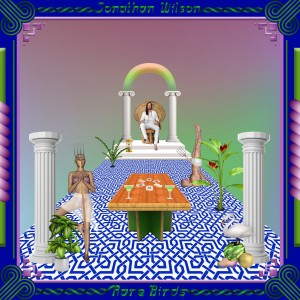 Jonathan Wilson had a busy 2017, producing Father John Misty's grammy nominated Pure Comedy and touring arenas around the globe as a guitarist and vocalist for Pink Floyd legend Roger Waters (for whom he also contributed to the lauded Is This The Life We Really Want? album.) Wilson also saw widespread acclaim heaped on Karen Elson’s sophomore LP Double Roses, which he recorded with her in Los Angeles in 2016.

But it's not looking like Wilson is going to get much of a rest in 2018 either, as he'll be continuing on with the worldwide Waters tour and is set to release his own new solo album Rare Birds in the spring. The highly anticipated long player - which features backing vocals from Lana Del Rey, Josh Tillman, fellow Roger Waters bandmates Lucius and an extraordinary musical gift from otherworldly Brian Eno collaborator Laraaji - will be released through Bella Union worldwide.

Although much of the album is comprised lyrically of meditations on a failed relationship and its aftermath, Wilson insists that Rare Birds is not really a concept album. "It's meant more as a healing affair, a rejuvenation, a reconciliation, for others, and for me. I wanted to balance personal narrative with the need I feel for calming healing music. I think we need journeys in sound, psychedelic gossamer-winged music that includes elements consciously and purposefully to incite hope, positivity, longing, reckless abandon and regret. It's all in there."

And, for this one, music critics will need to retire the comparisons to heritage rockers and Laurel Canyon troubadours as they’re hardly useful anymore. Wilson's new sound takes a synthetic/acoustic, best-of-both-worlds analog/digital hybrid approach to achieve the complexity, sonic density and glossy hi-fi coating of Rare Birds. Heard for the first time on a Jonathan Wilson album are the sounds of synthesizers and drum machines.

Andy says: Jonathan has eschewed the obvious Laurel Canyon trappings this time out, and the result is his best record yet. Still blissed-out, otherworldly, multi-layered and lonnnnng, but the sound is beautifully streamlined with even synths and drum machines gliding by. A headphone masterpiece.