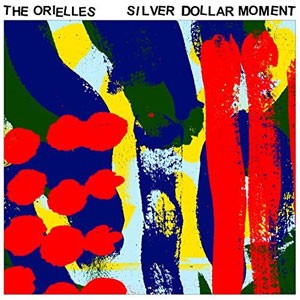 Sidonie Hand Halford is a Christmas temp at the Post Office in Liverpool, her younger sister Esme is studying English literature at Manchester, and their friend Henry Wade is preparing to sit his A-levels in Halifax next summer.

From the first jangling sunshine chords on opening track ‘Mango’, Silver Dollar Moments announces itself as a proper piece of indie pop goodness. Then, across 45 minutes, it takes all kinds of turns, into ESG-ish yips and funk, dreamy-arch harmonies, disco synth-pows and stoner bongos, unsettling submerged voices - with all that and more it still flows like a fountain of indie pop, fresh and catchy and altogether.

Maybe one reason it all coheres so beautifully is that The Orielles are a close-knit unit: two sisters and their best mate. “We met Henry at a house party a few years ago,” says Sid. “I mean, it’s a bit lamer than that sounds. It was a friend of our parents, she was having a 40th birthday party, and we went along, and Henry was there too, with his parents.” They’ve been writing songs together ever since, Esme singing and on bass, Sidonie on drums, Henry on guitar. They’ve played live all over the UK as well as Europe and North America, and this year they signed to Heavenly Recordings and headed into Eve Studios in Stockport.