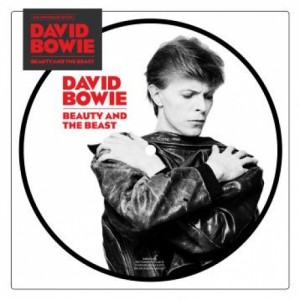 Beauty And The Beast is the latest in the series of special limited edition David Bowie 7” picture discs being released and will be out on 5th January 2018, almost 40 years to the day of its original release on 6th January 1978.

Beauty And The Beast was the second single taken from the album Heroes, the second of the Berlin Trilogy albums recorded with Tony Visconti and Brian Eno at the legendary Hansa Studios in Berlin. The track also features Robert Fripp of King Crimson on lead guitar, who claims that his guitar was all recorded in his first take.

The A-Side of the 7” picture disc features the track with newly remastered audio, mixed by long-time Bowie collaborator Tony Visconti. The AA-Side is a previously unreleased live version of Blackout, recorded live at Deutschlandhalle, Berlin on 16th May 1978 during the ISOLAR II tour.