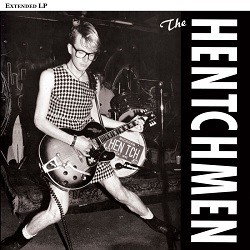 The Hentchmen played their first show on Halloween of 1992 and have still shown no signs of slowing down. They are noted as some of the earliest purveyors of Detroit-style garage rock. Over their lengthy lifespan, The Hentchmen have released 27 singles (about one each year!) and 8 full-length albums on groundbreaking garage rock labels Norton Records, Estrus Records, Get Hip Records and even a promotional release through Chevrolet. You cannot get more “Detroit” than that. To say “Hentch-Forth” is their best would be a lie, because whichever record you have spinning is the best! But this album serves as an excellent starting point into their vast, powerful discography. Hentch-Forth (1998) is the The Hentchmen’s only album that includes Jack White on bass. This extended edition includes the “Some Other Guy” single that also features Jack on guitar plus a couple phenomenal bonus tracks. There's a joke and a fun fact regarding this record that would have been all but lost over the decades. Italy Records and the artists included “with Jack White” on both the 7” and the 12” because they thought that it would look like one of those old British Invasion records that would have an old bluesman or rocker as a guest. And for all the White Stripes trivia-heads - The Hentchmen’s “Some Other Guy” and The White Stripes’ “Lets Shake Hands” were recorded AND released at the same time, before the world would know what hit them!