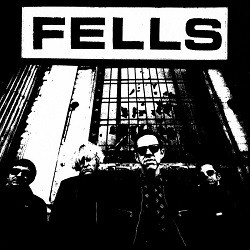 Hailing from Tucson, AZ, The Fells were churning out high quality, catchy singles throughout the ‘90s with the same ferocity as well-known contemporaries the Mummies or New Bomb Turks. Their Italy Records single, which was the ninth 7” in the Fells’ discography, is one of their most heavy-hitting and finest. The A-side “Close Your Eyes” is practically bi-polar with all the pep, bop and swing that makes a single worth snatching up!

The backstory of this recording is one totally reliant on chance, and almost didn’t happen. The Fells’ van broke down while on tour from Tucson and they were stranded at The Hentchmen’s house, aptly called the Hentch House. With time to kill, the group toted their gear over to their buddy Jack White’s house and recorded these two killer songs for later release on Italy Records. It notably features special guest Johnny Hentch of The Hentchmen on piano.