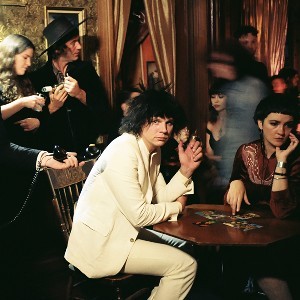 Ever since his debut album Dolls of Highland was released on Sub Pop in 2016, Kyle Craft has been a critic's dream. Based in Portland, he serves up all the observational, storytelling talent with none of the attitude that so often comes with male singer-songwriter territory. “I've found my place,” he says. “I'm not one of those people that approaches music for anyone other than myself. My favorite part about music is when it's just me and a notebook.” Speaking of, his second forthcoming album Full Circle Nightmare is entirely autobiographical. Sonically, thematically, lyrically, it's a huge leap forward from his 2016 release.

The title Full Circle Nightmare refers to a moment where Craft saw his life for what it is and told himself to be satisfied. “But that's nightmarish to me,” he laughs. He described his debut record as: “like walking down this long hall of bizarre characters and surreal experiences, moving through the spider web of love and loss.” This album is when you get to the end of that hallway, turn around and see all the stuff you've been through, then walk through the door, close it and start a new chapter in an even crazier hallway. A straight-up rollicking rock'n'roll album, it traverses all the different nuances of the genre; from the bluegrass twang of 'Exile Rag,’ to the gothic style of 'Gold Calf Moan,' it's a timeless piece that could exist in any of the past five decades.
In terms of contemporary peers, Craft likes to stay in his own lane. He's an old soul who sticks to his tried and tested influences. Social media is not his game - it's just not interesting to him. He's not fussed about preaching his politics or discussing the status quo either. “I don't really like writing a time piece. I don't wanna get trapped in the 'Donald Trump era of Kyle Craft,' you know? I'm a very off-the-grid sort of person. As much as I am traveling across this giant place sometimes I just feel so outside of it. Also, I'm not necessarily a stand-up citizen so it's hard for me to say: here's Kyle Craft's America, ladies and gentlemen.”

The ironic thing is that Full Circle Nightmare sounds exactly like Kyle Craft's America. That is what he's built for us: the story of one man's trials and tribulations to find his passion and voice for art and creativity in this vast opportunistic country. Where did he find it? Among the historic riches of America's most honest sounds.

Barry says: Sliding guitars, tinkling pianos and the percussive sound of saloon doors opening in a hurry, tastefully hinting at classic Americana anthems, but tempering them with a melodic and progressive sensibility rarely heard in classic country rock.