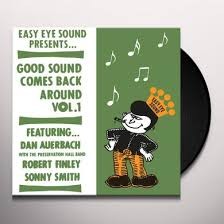 Eight-time GRAMMY–­winner, Dan Auerbach, announces a 7” Easy Eye Sound sampler, Good Sound Comes Back Around Vol. 1, which will be released as part of Record Store Day’s Black Friday initiative. The new 7” is a preview of upcoming releases on Auerbach’s label and features ‘Cellophane Angel’, an exclusive and unreleased track Auerbach recorded with the Preservation Hall Band, on Side A, and Robert Finley's ‘Medicine Woman’ – the first single on his new album Goin’ Platinum! due December 8 – and Sonny Smith's ‘Pictures of You’ on Side B