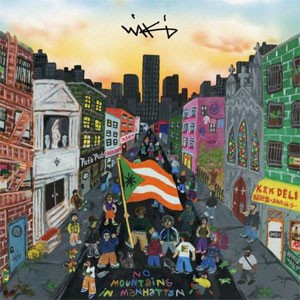 One of ex-staffer Michael Riley and current staffer Matt Ward's favourite rappers of late, Wiki of Ratking and solo fame drops a much anticipated new full length via XL as he climbs to the top of the new school and hits a well documented purple patch. The toothless, skateboard loving, Arnold Palmer drinking upstart has had quite a rise to stardom, after blowing us away with hit after potty-mouthed hit and with some of the most creative and unique videos to have hit the hip-hop genre in recent times. With Ratking he flipped what was expected of hip-hop groups in general, adding a psychedelic yet gritty haze, flipping song structures and retreating from the misogynistic, all-frontin' bullshit that half of the hip-hop game seem to be peddling. Solo we see him in comfortable stride, mixing a half-sung vocal style with fiery and poignant flow, always sticking to content that's real and fully lived be him and his crew. You won't hear him fake-talking about peddling crack and having millions in the bank (or driving a Ferrari for that matter...), just quick-witted, keen-eyed observations on street life delivered with a sharp tongue. The album features fellow New York natives, both legend and novice, including Ghostface Killah, Lakutis, ACAB, Slicky Boy, Your Old Droog and more. Production credits include Ratking’s Sporting Life, Tony Seltzer, Kaytranada, Earl Sweatshirt and Wiki himself; a who's who of who's reinventing the script in 2017>18. Highly recommended.

Matt says: It's time for the whole world to hear how Wiki-speaks as the NY rapper climbs to the top of the game and shouts his message to the world. Get on board.