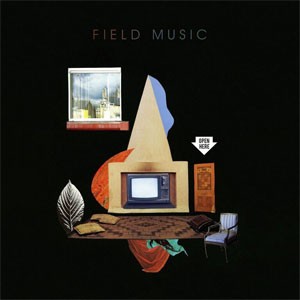 The two years since Commontime have been strange and turbulent. If you thought the world made some kind of sense, you may have questioned yourself a few times in the past two years. And that questioning, that erosion of faith - in people, in institutions, in shared experience - runs through every song on the new Field Music album.

But there's no gloom here. For Peter and David Brewis, playing together in their small riverside studio has been a joyful exorcism. Open Here is the last in a run of five albums made at the studio, an unprepossessing unit on a light industrial estate in Sunderland. Whilst the brothers weren't quite tracking while the wrecking balls came, the eviction notice received in early 2017 gave them a sense of urgency in the recording of Open Here.

There probably won't be many other rock records this year, or any year, which feature quite so much flute and flugelhorn (alongside the saxophones, string quartet and junk box percussion). But somehow or other, it comes together. Over thirteen years and six albums, Field Music have managed to carve a niche where all of these sounds can find a place; a place where pop music can be as voracious as it wants to be.

Barry says: Oh Field music, will your jagged chords and thumping, percussive oddness never grow weary? Apparently not, because here we have another outing that hasn't been off the shop stereo since we got the promo a few weeks back. We're all still enamoured here, and you will be too.