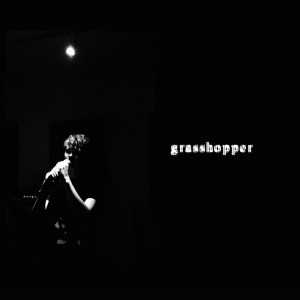 Darkly melodic and possessed by an intense, driving urgency, grasshopper (with a small 'g') are a teenage band from Brighton whose youthful energy, DIY approach and unashamed ambition has seen them become a musical force to be reckoned with whilst all still teenagers. Fronted by the chiselled cheekbones and dramatic baritone vocals of singer-guitarist Javi, they fuse gothic post-punk, shoegaze and psychedelia into perfect moments full of passion, emotional complexity and ambiguous romanticism.

Gigging extensively around their hometown and beyond, grasshopper have supported the likes of the Charlatans and the Go Team and have played at the Isle of Wight Festival, Kendall Calling and Festival no.6 as special guests of Tim Burgess. The three tracks on the single are taken from the sessions for their debut album, recorded with legendary producer David M Allen (The Cure, Sisters of Mercy). With a sound evocative of the Chameleons, the Comsat Angels, Bauhaus or Interpol, grasshopper have a maturity and a musical grounding beyond their years, citing Nick Cave, Julian Cope, The Fall and Deerhunter among their influences.