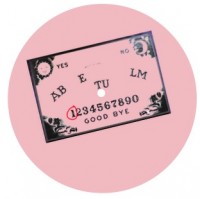 We're not allowed to divulge any info on this one yet folks, other than a cleverly plotted out Ouija of the label name, some very fetching old school purple master bag sleeves & three incredible cuts of secret origin via the mystifying oracle that is Mutable. Setting off from where Vedit, Tropical Jam and Eros last dropped anchor, we get a hybridization of edit material and original flurries across three tracks by a well known and celebrated Northern England stalwart who, for now, is gonna remain anon. Side A sees jazz-funk given a tribal swagger as lush xylophone licks and a perfectly composed b-line meet an extended drum palette and subtle analogue fx swirls. Next up, Zanzibar favourite and recently unearthed (by the Good Plus team) tropical disco jam "Avidio" gets worked into something completely different by Mutable. Finally another under-the-radar number gets tweaked for the freaks as Mutable deploys some cheeky after hours fun and play to proceedings. Top stuff!

Matt says: It's true! We're REALLY not allowed to give anything away this time round... Unbeatable stuff though (as always from this cat - whooops!). Answers on a postcard and we'll announce the winner in the new year...