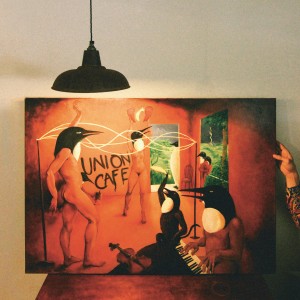 Erased Tapes has the privilege of reissuing Penguin Cafe Orchestra’s last studio album Union Cafe — out December 1st 2017 to coincide with the 20th Anniversary of Simon Jeffes’ passing in 1997.

"I was 17 when Simon Jeffes passed away and sadly I never got the chance to meet him whilst he was still walking this earth with his infamous Penguin Cafe Orchestra. There are some parallels between our lives that could simply be rationalised by the fact that anyone that loves music travels a lot. But from what I know about Simon we both seem to believe in something beyond that, something more magical that cannot be explained by numbers alone. For example, the fact that Kyoto had both a special impact on his and my life as the city where he found the harmonium on which he’d write his possibly most famous piece of music and the one where I found the love of my life. Or the fact that we both got severely poisoned by eating bad seafood in the south of France. Although admittedly I can’t say that my bed-bound days of hallucinations come anywhere close to the grandeur of his recurring vision; one of a George Orwell type of desolate future with people living in concrete buildings, hearing without listening, making love and music without touching. It was only the other day that I heard Simon’s son Arthur tell this story for a BBC documentary on the Erased Tapes tenth anniversary festivities inside one of London’s largest brutalist buildings, the Southbank Centre, and in a time when making music and love over the internet is seen as something perfectly normal. I wasn’t aware until then that our shared near-death experience in France propelled Simon to dream up a place called the Penguin Cafe, where penguins serve the Japanese soul food that is Okonomiyaki and wine that makes you feel lighter, float even — a colourful, magical place far away from those big grey buildings where everyone is neutral, numb and anonymous. And so he’d form the Penguin Cafe Orchestra and dedicate his life to writing the joyful music the band would play in that cafe.

The first song from Union Cafe that I’d unknowingly heard was Nothing Really Blue, performed live by Arthur and his successor band Penguin Cafe at the Barbican in summer 2016 — another icon in brutalist architecture. He simply announced it as “another one of my dad’s”, and left me wondering all night about which record it was from. Considering myself a decent collector of their music, I thought I’d heard it all. Well, I clearly hadn’t. Another mystery? I forgot to ask when I first met Arthur that night, but it marked the start of our relationship as kindred spirits. For everyone who hasn’t had the pleasure of witnessing it yet, hearing Arthur play his father’s songs with so much joy and gusto truly feels like meeting old friends. And it’s the most beautiful reminder of how everything in this world is connected. It’s one thing to accept growth and decay as a constant passing on of energy and knowledge, from one generation to the next. But I really can’t imagine the kind of love that Simon must feel if only he had the chance to see his son right now, performing his songs in front of thousands of people on both sides of the planet each night.

It wasn’t until summer 2017, a whole year later, that Arthur shared his father’s last studio recordings with me. Union Cafe is a record that somehow missed me, simply because it wasn’t available on vinyl like the other records were that I had gathered over the years. I couldn't help but feel privileged for the chance to discover another original PCO album. And so I put my headphones on and lay down at the foot of the small lake in Victoria Park to listen to this box of treasures. And as with all of Simon’s works, a whole world appeared in front of my closed eyelids — a world full of love and wonder, that manages to put tears in my eyes, shivers down my spine and a smile on my face. Scherzo And Trio would become the song that manages to brighten up my days, no matter how grey London sometimes gets. Organum would become the piece that Arthur played at my wedding. Cage Dead with its déjà vu-like character would become the theme song to a series of live sessions with artists from all around the world performing in the Sound Gallery, our new home on 174 Victoria Park Road. Songs like Silver Star Of Bologna and Kora Kora, just like all the classic PCO songs, would feel familiar, though I’d never heard them before. Lie Back And Think Of England sounded like the work of a seasoned composer and yet unfamiliar at the same time — it made me wonder if Simon was planning a new adventure for his orchestra. Lastly, Passing Through would remind me that having a hidden track on your album was very popular with bands in the 90s, but finishing your album with the sound of water dripping out of a sink, slowly forming a musical pattern within all the chaos before the record suddenly ends, surely must be the most perfect way to say goodbye.

Dear Simon. Even though we never met, strangely I too feel like I lost a friend on December 11, 1997. And I like to think it’s simply down to the music that you left us, the songs that have become some of the best companions one could ask for, reminding us that there’s an alternative to the prison we’ve built ourselves. And that with every song I get one step closer to the magical world you’ve created, and that Arthur continues to create. I like to think that if I keep listening, maybe one day we will all unite in the Penguin Cafe, so I can tell you all about the wonderful son you and Emily have raised. And so I can thank you for all the love you’ve given this world.”– Robert Raths.