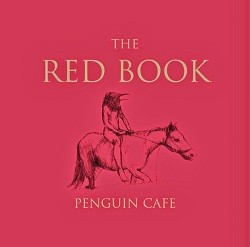 Penguin Cafe released ‘The Red Book’ on 17th February 2014. The sophomore release from the freshly re-imagined Penguin Cafe is the culmination of two years work that has seen Arthur Jeffes - son of original composer and Penguin Cafe Orchestra founder Simon Jeffes - investigate whole new areas of sound and vibrancy, alongside his eclectic collection of musicians and characters, marking an ambitious extension from their debut ‘A Matter of Life’ (2011).
The catalyst for the new recording came about when Jeffes worked on a project with the International Space Orchestra and NASA Ames in 2012, out of which came the pieces Aurora and 1420, which have since been beamed into space as part of NASA’s Kepler project. These touchstones marked a satellitic beginning for a new album, a collection of songs that would then return to earth to undertake a rich, cross-continental, musical journey.