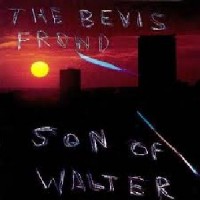 When the sleeve of The Bevis Frond’s ‘Son Of Walter’ arrived circa 1996 it was a mystery. The title is scratched on a window overlooking an Islington block of flats, the sunset is distorted. Today it would be the view from a banging grime pirate radio station. Back then, it was one man locked in his bedroom with too many ideas and too many instruments (and a Portastudio). It’s the Frond’s 15th studio album. “The release of this work signals a resurgent appreciation for the noodly psychedelia of which this Brit is the master,” claimed the beautifully named Jennie Ruggles in Addicted To Noise. “Guitar fans will eat this album up,” Calendar, a magazine in the US argued and Pulse! Magazine reckoned: “’Son Of Walter’ offers new recruits a generous and reasonably representative introduction both to Saloman’s deeply ingrained mastery of ‘60s-vintage idioms and to the humanity and tunefulness that sets him apart from less imaginative retro-formalists.” Ah, retro formalists, we love them.

"Don't ask why, but for this album I decided to make the long-awaited(?) return to the style of the first few BF records. So it's back to the home recording facilities, and back to being the only person involved. So it's definitely worse than the recent stuff. (Feel free to disagree)," Frond mainman and, indeed the only Frond left standing on this opus, reasoned on the sleevenotes when it first sneaked out on the super cool Flydaddy label in the US. So, what is it all about? The trademark folk strum with multi-harmonies is there. There’s a slight nod to a country-ish CSN&Y thing, but that’s only for four bars. Who remembers that when there is the colossal ‘Garden Aeroplane Trap’, a proper wig out at 12 minutes 20. Elsewhere we have the kind of timeless psyche pop that people with ears really love, two songs that namecheck Elvis and a song about a dead man on a train. That was London in the late ‘90s. Hey, rock ‘n’ roll.