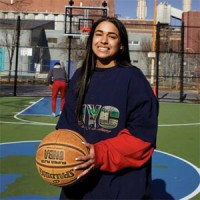 Prepare to hear the hottest shit around! Stomping out of Harlem in an explosion of speaker wrecking beats, hard hitting bars and vintage clothing, Princess Nokia has taken the world by storm of late. Sticking a fat middle finger up to the hyper masculine (often misogynistic) hip hop crowds, white male industry bods and bro-ey haters, Destiny Frasqueri blew up last year with the release of her '1992' mixtape, and now returns with an expanded version for physical release. A child of the 90s, Frasqueri was robbed of the noughties via an abusive foster mother, leaving home with 3$ and 75% battery to make her own way on the streets. After a brief brush with the industry as Wavy Spice in 2012, Destiny swerved the suits, headed back to Harlem, only to re-emerge as Princess Nokia. Taking her name from the cheap ass Obamaphone she got from the state, Destiny set about combining a hard edged punk attitude, political consciousness and a fuck load of raw talent into the freshest rap you'll hear in 2017. Flow-wise we're talking the best of Wu, Nas, Monie Love, Biggie & Pac; politics are Le Tigre, Bikini Kill and L7; the beats flip between Premo head nod and trap rumble and the lyrical content touches on the gentrification of NYC, her upbringing, contemporary feminism and her unapologetic outsider status. So if you were wondering what rap should sound like in 2017, it's this - a fiercely independent intersectional feminist making a whole lot of noise. Turn it up!

Patrick says: Holy shit! If this had dropped a month earlier we'd have had to make some serious alterations to the End Of Year Chart. Packed from top to tail with neck snapping beats, razor sharp lyrics and a life changing flow, "1992 Deluxe" is as good as Kendrick's "Damn". No bullshit!