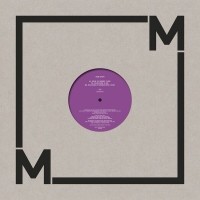 Music From Memory’s final 12" for 2017 is a reissue of Dub Oven's self released, and sadly one-off, 1983 EP 'Skin N Bones’.
.
Pioneers in the Post Punk Industrial and New Wave scene in 1980’s San Francisco, Gary Miles (Voice Farm) and Blaise Smith (Minimal Man), met at San Francisco’s notorious 181 Club in December of 1982. This straight/same sex/swing-both-ways late night dive bar was tucked away in one of the city's most risky, drug riddled neighbourhoods. Stationed near the SF Museum of modern Art it attracted a wild audience of local patrons, aspiring young artists and music heads. In the thick of all this the duo felt impartial to a lot what was going on musically and set out to produce electronic music that could break through the "somewhat exhausted post disco sound that was then competing in the local San Francisco clubs". Enlisting soul vocalist Celeste Miller, the duo were also inspired by Lee 'Scratch' Perry / Upsetters dub tracks being produced in Jamaica and created a unique breed of avant guard hybrid New Wave/Electronic Funk.

With its influences seemingly as much rooted in the past and the present as it was focused on the future; Dub Oven formed a distinct, mystical approach to music intended for the dance floor. All three tracks on this 12" embody a signature groove and an inventive synthesized abstraction to express a languishing urban unsettledness and spiritual awareness. Recorded at L7 Studios in San Francisco with the assistance of the the studio’s in house producer Marco Perry (who currently now works with Bjork) the record was unfortunately overlooked by A&R at several major and even local labels and was finally self-released in very limited quantities. Utilising analog electronics and instrumentation, the record draws on elements of dub, new wave, soul and funk to create a sound that is uncategorizable and one that was perhaps simply too forward thinking for its time.

Patrick says: MFM cap off an excellent year in their 12" series with this bonkers bit of dubby/new wave from 80s Frisco. There's a wonderfully weird bedroom B52s vibe to these three tracks, which are currently causing all manner of excitement amongst the Piccadilly staff.