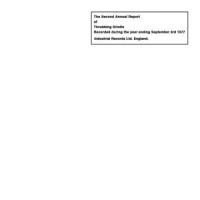 Throbbing Gristle's first album - the "Second" refers to it coming out at the end of their second year together - must have sounded like it came from another planet upon its 1977 release. Heavily influential to industrial outfits of the 1980s, who took TG's raw, experimental noise ideas and made them more accessible, "Second Annual Report" is TG at their most extreme.

From its deadpan sleeve to the peculiar choice of structuring - the album features three separate live versions of the horrific "Slug Bait" (including a wonderful clip of a DJ screaming at the audience after a Throbbing Gristle gig) and four more straightforward cuts of "Maggot Death" - "Second Annual Report" is a startling document. This reissue also includes the lengthy improvisation "After Cease to Exist" and both sides of the subversive "United / Zyklon B. Zombie" single.