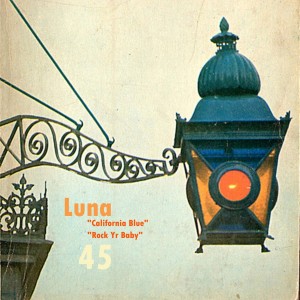 Feral Child, the on-off label that brought you vinyl only releases from Snails, Pete Astor, The New Lines and The Orange Alabaster Mushroom, returns with not one but two totally ace LUNA 45s, due for simultaneous release mid to late October 2017.

Both containing covers, the first acts as a companion piece to the great “A Sentimental Education” LP, with the Orbison / Petty / Lynne penned A side; “California Blue” (from Roy Orbison’s hugely underrated 1989 “Mystery Girl” LP). A key, if cautionary, comment from Dean Wareham himself on this one: “It’s not possible to duplicate the great Roy Orbison; we decided to go away from the Jeff Lynne pop style of the original and try it more in the vein of Pavement’s “Range Life.””

The flip features the bands’ cover of “Rock Yr Baby”; “"George McCrae’s disco classic is an important single. Written by Casey/Finch (of KC & the Sunshine band), it is one of the first disco hits to feature a drum machine. It has been in our live set for a while at the stroke of midnight but only if we are playing a show on New Year’s Eve.” (DW)
This first single is released in an edition of 500 only.