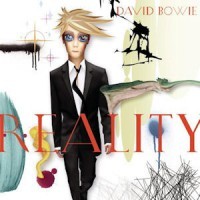 'Reality', the 23rd album of David Bowie (2003) followed up on the heavily successful formula of Heathen, combining infuences of Bowie’s Seventies’ past (say, from Heroes to Scary Monsters) with a contemporary new millennium vibe. David produced this album together with Tony Visconti, the dream team that also made Heathen a true work of art, resulting in yet another sure fire production and memorable songs. The album made it to the top 30 of the Billboard 200, and set the course for great Bowie albums to follow.