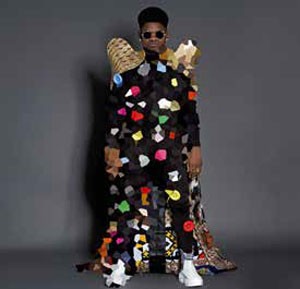 The mighty Soundway Records keep their relentless release schedule right on wallet emptying track this week with the debut solo album from the ever-energetic Diron Animal, lead singer of the band Throes + The Shine. "Alone" offers infectiously rhythmic dance music from the Angolan streets, fusing electronic production with traditional music.  Born and raised in the Angolan ghetto of Cazenga, the now Portuguese-based instrumentalist’s new record is a melting pot of musical styles and cultures. “I come from tribal music” says Diron. “I had a traditional music group, then I moved to a Capoeira group where I was a main corrido and I played batuque. Around that time I also started introducing Hip Hop and Kuduro styles. Then I mixed Kuduro with Hip Hop and Kuduro with Rock. Now I am making music for all people and all ages.” With a foot firmly set in his ghetto roots, the album is a personal exploration: “Cazenga is a place where a lot of the Angolan dances were invented, where children roam around barefoot and have no food but can transform their struggles into creativity”, says Diron.
This movement and struggle is at the core of the new record. Traditional African styles blended with Portugal’s frenetic electronic music style, culminate in a vibrant, energetic and rhythmic record that deals in both adversity and positivity. Furthermore, spell-binding rhythms, bass hooks and original lyrics abound, spanning Portuguese, Kimbundu and English. On “NCrazy”, he teams up with celebrated South African rapper Spoek Mathambo to portray life in the ghetto - a place where children may roam around barefoot and food is scarce - but where a positive attitude could be the difference between breaking free or not.