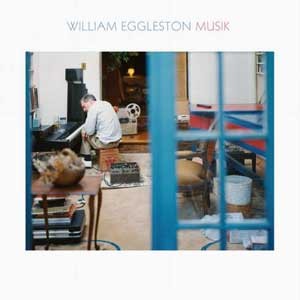 Native Memphian William Eggleston, 77, is widely regarded to be the most important photographer of the late 20th Century but there is another side to him that took root in his Sumner, Mississippi childhood, where he discovered the piano in the parlour that ignited in him a lifelong passion for music.

In the 1980’s, Eggleston, who disdained digital cameras and modernity in general, became surprisingly fascinated with a synthesizer, the Korg O1/W FD, which had 88 piano-like keys and in addition to being able to emulate the sound of any instrument, also contained a four-track sequencer that allowed him to expand the palette of his music, letting him create improvised symphonic pieces, stored on 49 floppy discs, encompassing some 60 hours of music from which this 13 track recording was assembled.

The music, which he refers to as ‘Musik’, adopting the German spelling of his hero, JS Bach, is highly emotional, whether he’s improvising a Bach-like organ fanfare out of whole cloth, using a Korg patch titled ‘Guitar Feedback’ to create a dirge, or playing Lerner and Lowe’s ‘On The Street Where You Live’ as a dramatic overture.

Release available in a beautiful gatefold double LP with photography by Alex Soth.