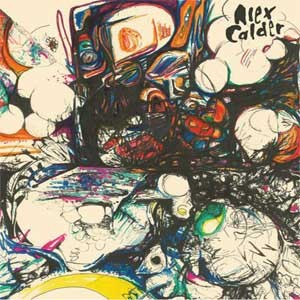 It’s surprising that Alex Calder’s self-titled album is only his sophomore long player effort, considering the prolifically consistent stream of lo-fi weirdo psych-pop he’s put out since his introduction via 2013’s ‘Time’ EP.

While the forthcoming album remains true to Alex’s sonic aesthetic, it is a release that clearly exemplifies a moment of artistic evolution and expansion in both influence and the writing and recording process. Alex found himself frequently revisiting Paul Thomas Anderson and old anime films while writing and drawing influences from Stereolab, Broadcast, Pavement, Arthur Russel and Kate Bush, to videogame soundtracks such as ‘EarthBound’ and ‘Zelda Ocarina Of Time’.

“I felt more confident saying things in my songs I actually want to say this time. Things I was scared to sing about before seemed a lot easier for these songs.” Perhaps this is due to the year he spent re-working and perfecting demos until they blossomed into fully-formed, dynamic songs - a process far from the more visceral, off-the-cuff approach he’d taken with his earlier work. “All of my music before has essentially just been demos I’d made at home, and then they end up being records.” This time around, Alex took time and space for himself to discover a greater level of expressive intent behind his lyrics and musical compositions.

A contrast between sound and lyrical meaning is a friction retained consistently across the album’s 12 tracks and this album-long meditation on duality is certainly intentional as Alex explains, “I’m hoping people notice that this is a somber record, but not meant to be a depressing record. I want someone to listen to my music in headphones in their bed if they are having a bad day or to put it on in the background at a house party to heighten the mood.”

It’s fitting, really, that this album be self-titled, as it is a kind of proclamation of self for Alex, an expression, or admonition really, of who Alex Calder is - the good and the bad, the sad and the goofy, someone who loves to joke around but is still capable of being serious and expressing himself more personally. For Alex, these dualities are not contradictory but almost symbiotic - “I feel like the two go hand in hand. It’s a classic sad clown thing.”