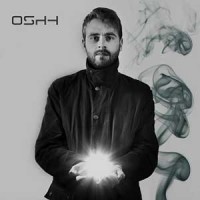 The tremulous vocals and the creeping tectonic plates of reverb and synth, make OSHH’s debut an unlikely piece of euphoric pop. Yet from windswept shores of Anglesey, via a studio in rural north Wales, OSHH has built an album of futuristic slow burning hooks and ambitious arrangements. From the opener Hen Hanesion, the interplanetary communique Used to Fly featuring Casi, the big beat drama of Birds and the beating electronic heart of You Were Wrong and You Were Right, this is a distinctly modern album with a strong dose of mysticism.

A music graduate from Bangor University, Howells crew up in the village of Star on the island of Anglesey off the Welsh coast. Having made a name for himself in Wales as a founder member of pop band Yr Ods, Osian Howells began releasing his own material on Blinc Records in 2014. The tracks All Mistakes, Lleisiau’n Galw and Dal i Frwydro. Another of his songs, Rhywbeth Gwell featuring on the Welsh language compilation O’r Nyth.

Recorded at Ironworks Studio in Llanllyfni near Caernarfon, with producer Kevin Jones, OSHH exists at the darker end of the pop spectrum, plotting the distance between peoples and places in stories both real and imagined.