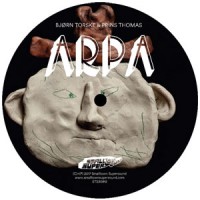 After joining forces on the collaborative album “Square One” earlier this year, Bjørn Torske & Prins Thomas are now ready to share their brand new 12inch named “Arpa”. The new 12inch is the perfect continuation of the album. Prins Thomas explains:

”After the initial "Square One"sessions we felt that "Arpa" was less of a "teamplayer"and one that would be difficult to shoehorn naturally into position on the album. Where the album sounded more like breaking new(old) ground between the two of us, "Arpa"is the one that felt most like an expected outcome from these sessions. Purpose made for adventurous dancefloors, either on earth or in a parallel universe you'll find "Arpa"in 3 versions. The original with it's sparse BUT "all hands on the desk"arrangement, the chopped up and reassembled remix with it's static energy cranked up to the max and last but not least the "Plastikman BUT in the 60's..." version in "drum version". Once again utilizing a giant mixing desk for the arrangement, 4 hands(+ other free limbs), the percussive elements are let free to roam in what we call a "dj-unfriendly tool"”