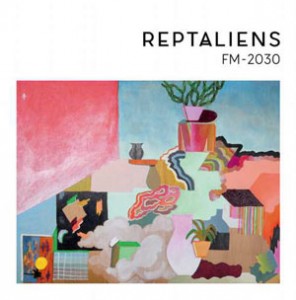 Portland, Oregon’s Reptaliens is the husband and wife team of Cole and Bambi Browning. The couple met on a basketball court while filming a music video for a mutual friend’s band that didn’t exist. The two knew almost instantly they were soulmates; after dating for six months they married under a blanket of smoke from the season’s forest fires.

Named in reverence for their interests in cult mentality transhumanism, and conspiracy theories, Reptaliens quickly evolved from a bedroom recording project to a full-fledged band that explores fringe pop culture through analogue synthesizers, electric guitars, melodic basslines and Bambi’s lulling vocals. The pair’s songwriting mirrors their strong connection. As Cole says, “Bambi and I write all the music. Sometimes we work together to construct songs and sometimes I’ll come home from work and she’ll have a masterpiece finished and perfectly crafted. We both add to each other’s songs and none really seem completely Bambi’s or mine. We do everything together.”

Inspired by all things science fiction, writers like Philip K. Dick and Haruki Murakami and music ranging from Paul McCartney / Wings to African artists Francis Bebey and Nahawa Doumbia, the band creates psychedelic, chameleonic dreamscapes that fall sonically and visually somewhere between abstract expressionism and surrealism. These ideas and influences all coalesce on ‘FM-2030’ - named after the renowned transhumanist writer and philosopher - the band’s debut album on Captured Tracks.

Thematically based around obsession, Bambi says she “gravitates toward other people’s obsessions and draws inspiration from them. I like to think of method acting and personify myself as the obsessor, writing from their perspective. I love pretending and creating around these personalities.” This play-acting on record translates to the band’s sincere and theatrical live performances that involve homemade costumes and on-stage guest appearances from a giant reptile man.

‘FM-2030’ was recorded at famed Portland studio The Green House with Riley Geare. As longtime active participants in the Portland music scene, Bambi and Cole called on a number of talented musicians for Reptaliens’ recordings and live performances, including Julian Kowalski (guitar), Bryson Hansen (synth) and Tyler Vergian (drums). However, Cole is quick to note, “Reptaliens is a concept more so than a band or any group of individuals. Those who are willing to let go and open themselves up to new experiences will be rewarded and emboldened. Those who want to turn away will have no choice but to look. The truth is out there.”