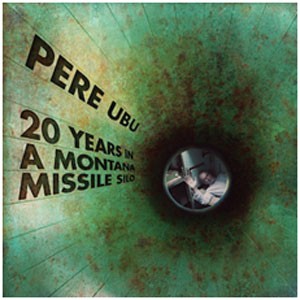 Fronted as ever by David Thomas, Pere Ubu unveil their new album, 20 Years In A Montana Missile Silo, which opens the doors of the avant-garage to reveal the hardworking mechanics hammering away at the fundamentals of blue-collar rock.

David Thomas: “The new album is The James Gang teaming up with Tangerine Dream. The Chinese Whispers methodology we worked on the last two albums has been replaced by the Dark Room. Put musicians in a lightless room and by feeling one small section of an unknown object have them figure what it must be.”

The album was recorded and mixed at Suma, Painesville Ohio. Engineer Paul Hamann, and his father before him, have been part of almost every Pere Ubu album since 1976.