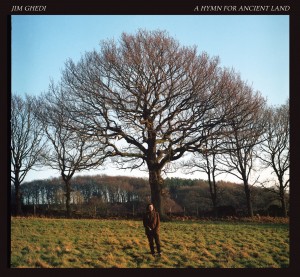 Born in Sheffield before moving around various parts of Derbyshire, Shropshire and Scotland and then settling in Moss Valley - an abandoned and forgotten area on the edgelands of South Yorkshire and North East Derbyshire - it makes perfect sense that 26 year old Jim Ghedi’s music feels both fluidly transient yet also deeply rooted to a sense of place.

In 2015 he released his debut album, Home Is Where I Exist, Now To Live and Die (Cambrian Records), which was an extension of the folk-tinged six and twelve-string acoustic guitar instrumentals he had been forging for some time around Sheffield's pubs and then whilst traveling across Europe. On his second album, A Hymn For Ancient Land, his elemental style of playing has expanded into a fuller band set-up, complete with glorious orchestration and dazzling composition that makes it a truly innovative contemporary record whilst still being rooted in great tradition.

Through the inclusion of double bass, violin, cello, harp, trumpet, piano, accordion and numerous other instruments, Ghedi has elevated his unique blend of folk music to a level far beyond that of that of his earlier work. Perhaps most remarkable still is how seamless their inclusions feel, rather than wrestling for space, the wealth of instruments float in and out of one another, interlocking absorbing guitars, gently whirring strings and drums that beat like the faint sounds of thunder on the horizon.

On top of the community of Moss Valley, a driving force behind much of the creations on this record come from Ghedi’s travels, playing shows in numerous rural towns and villages across the British Isles. This traversing through remote parts of the UK, Wales, Scotland and Ireland soon brought a desire to capture the full breadth, scale and beauty of the landscapes he was witnessing. “I wanted to bring in wider instrumentation to somehow resemble the landscapes which musically I could hear in my head, It was at this point I became fixated on connecting the two worlds of classical and contemporary folk” Ghedi says of the album’s birthing period.

All songs on the album are named after places from said travels - ‘Home for Moss Valley’, ‘Bramley Moor’, ‘Cwm Elan’ etc - and Ghedi’s natural ear and eye for capturing the spaces he inhabits creates an immersive environment, in which the guitar lines seem to mirror rolling hills, the rich hum of the ambience hangs like a gentle morning fog and the intricacies and beauty of the arrangements create something almost tangible in their efforts, like capturing a light dew on the tip ends of grass or the sticky moisture of well trampled soil. Nature permeates through this record from start to finish, gliding through its core like a bubbling brook.