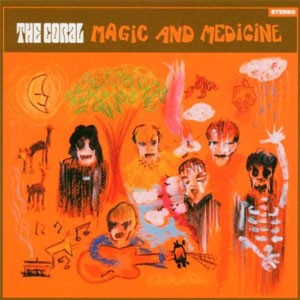 The Coral are an English rock band, formed in 1996 by Ian Skelly, Paul Duffy, James Skelly, Lee Southall and Bill Ryder-Jones. The band first emerged during the early 2000s and found success with their debut album The Coral [MOVLP338]. Their self-titled debut album was nominated for the 2002 Mercury Music Prize and later voted the fourth best album of the year by NME Magazine.

Magic and Medicine is the second album by The Coral, released in 2003 in the United Kingdom, where it debuted at number 1 in the charts. The singles “Don’t Think You’re the First” and “Pass It On” entered the top ten in the UK.

The album title originates from a lyric in Time Travel, the hidden track on the band’s debut album: “Well there’s a war going on, ain’t the obvious one. It’s between magic and medicine”.

This is The Coral’s last album with Bill Ryder-Jones, who departed in 2008 to start a very successful solo-career.

In The Forest
Don't Think You're The First
Liezah
Talkin' Gypsy Market Blues
Secret Kiss
Milkwood Blues
Bill McCai
Eskimo Lament
Careless Hands
Pass It On
All Of Our Love
Confessions Of A.D.D.D.

The CoralThe Curse Of Love