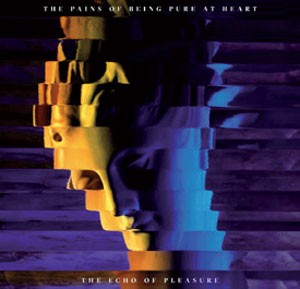 The Pains of Being Pure at Heart have long set the benchmark for bighearted, idealisti c pop songs. With The Echo of Pleasure, The Pains push beyond their many inspirati ons and embrace their role as indiepop heroes in their own right.

Showcasing the deft songwriti ng of frontman Kip Berman, The Pains’ fourth album is their most confi dent and accomplished. Aft er three criti cally acclaimed records, 2009’s The Pains of Being Pure at Heart, 2011’s Belong and 2014’s Days of Abandon received praise from The New York Times, Pitchfork, The Guardian and Rolling Stone, they have put together a collecti on of songs that possess a ti meless grandeur, deeper and more sati sfying than anything the band has done since their iconic debut. The record is augmented by guest vocals featuring previous Pains collaborators: Jen Goma on “So True” (A Sunny Day in Glasgow), bass guitar by Jacob Danish Sloan (Dream Diary), and horns by Kelly Pratt (Beirut, David Byrne, St. Vincent). The Pains of Being Pure at Heart live band consists of long-ti me guitarist Christoph Hochheim (Ablebody, ex-Depreciati on Guild), bassist Jacob Danish Sloan, drummer Chris Schackerman (ex-Mercury Girls, ex-Literature) and vocalist/keyboardist Jess Rojas.

The Pains Of Being Pure At HeartDays Of Abandon