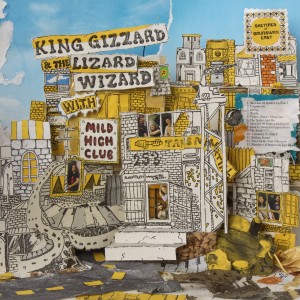 Just when you think you have King Gizzard & The Lizard Wizard sussed they throw a curveball - in the wake of two albums released in 2017 already, including most recently the dystopian end-times concept album Murder Of The Universe, which tackled in no uncertain terms the rise of robots and the downfall of mankind, comes Sketches Of Brunswick East, an entirely altered beast.

Australia’s finest and most productive rock band have done this before, of course: while the world was still reeling from their 2014 breakthrough psych-punk masterpiece I'm In Your Mind Fuzz (2014) they casually released 2015’s expectation-confounding Paper Mache Dream Balloon (2015), a pastoral, sun-drenched acid-folk album.

Sketches Of Brunswick East is a collaboration between King Gizzard and Mild High Club, the Los Angeles based tripster troupe signed to Stones Throw Records and led by Alex Brettin – the two bands formed a strong friendship touring together throughout the USA, Europe, and Australia.

Recorded at the band’s own Flightless HQ in East Brunswick, Melbourne Australia earlier this year and mixed at Stones Throw studios in L.A. it’s the third of five projected albums to be released in 2017.

“We were listening to compilations of Ethiopian music form the 1960s and 70s a lot,” explained Stu Mackenzie about the making of the record. “It was in no way thought-out though. If Murder Of The Universe was our most conceptual and arranged album - then Sketches... is the exact opposite.”

The title could be perceived as both a knowing nod towards Miles Davis’s Sketches Of Spain and the sketchy on-the-hop, improvised nature of its creation by these gnarly and feral Aussie dudes. It also sees the band further exploring the Tropicalia element only ever previously hinted at. Stu explains that a change of pace and tempo was necessary after “a concurrent period of productivity, a ball of energy and ideas”.

Logistically, its creation saw the sifting through “piles of ideas” previously laid down during intense periods of creation that their frontman confesses he barely remembers having taken place. Truly this is impulsive music, sketches of time and place reworked and pieced together, akin to, says Stu “sampling-culture, in which old ideas are reshaped and suddenly things make sense. It was like we were continually jamming with ourselves.”

Barry says: Oh Gizz', you may write 1.8 albums p/h but we love you so. This time out it's a tad jazzier but as ever, impeccable.