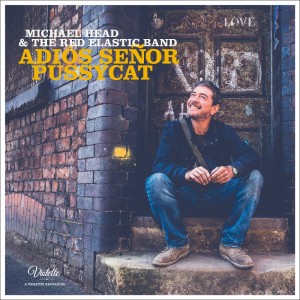 Beautiful and evocative and recorded in his home-town of Liverpool between March 2016 and June 2017, the album is the culmination of four years of hard work. Equal to his finest moments, Adiós Señor Pussycat will undoubtedly only further cement his reputation as one of this generations greatest songwriters.

Since a self-imposed hiatus in 2008, Michael Head has been working with a fluid concept of an ever-rotating band format to provide a flexible platform for the range of his new live and recorded works.

‘Under the guise of Michael Head & The Red Elastic Band in 2013, they released their sought-after debut EP, Artorius Revisited, and followed this with a double A sided 7”, Velvets In The Dark / Koala Bears in 2015.

A soulful and poetic genius, fate, bad luck and circumstance and often conspired to deny him his rightful dues. Loved and lauded by fellow artists and critics alike, he started out in the early 1980s with The Pale Fountains, with whom he recorded a brace of acclaimed albums, Pacific Street (1984) and …From Across The Kitchen Table (1985). He subsequently formed Shack with his brother John and went on to record five albums over almost twenty years including the much loved and acclaimed Waterpistol and HMS Fable in 1999 which saw the band briefly flirt with chart success and hailed from the cover of the NME as “our greatest songwriter”

He also released, what is often regarded as his classic album, The Magical World Of The Strands under the name of Michael Head & The Strands in 1997, and with Shack currently on hiatus he has been performing under the Red Elastic Band guise for the past few years.