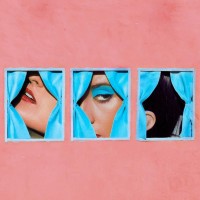 Midnight Sister - the project of intense creatives Juliana Giraffe and Ari Bazoulian - is brought to you by the isolating landscape of the San Fernando Valley - its colours, diners, lunatics and neon lights. Both lifelong residents of this storied valley, Giraffe and Bazoulian have only become more inspired by the area’s mythology over the years: its two-faced magical wonderland and tragic circus. Their debut, ‘Saturn Over Sunset’, works almost as an album version of Altman’s ‘Shortcuts’, each song a character study of the valley’s odd personae.

Giraffe, 23, the daughter of an LA disc jockey, was raised almost exclusively on disco and Bowie. Her lyrics and lyrical melodies, informed very much by her film-making background, were composed gazing out from a tiny retail window on Sunset Boulevard. Her ‘Rear Window’-like longing allowed her imagination to run wild and cook up the wild narratives that would fill Balouzian’s compositions.

Balouzian, 27, is classically trained and already a go-to arranger for odd-pop names like Tobias Jesso Jr. and Alex Izenberg. Midnight Sister represents a first for both of them. It’s Giraffe’s first time writing and performing music and it’s Balouzian’s first foray into playing true pop music.

‘Saturn Over Sunset’ is a shared musical vision of Hollywood’s oddest corners. It is the baroque, eldritch alley you must pass through to find the speakeasy night of your life. You’ll come out bleary-eyed and the sunrise will be pouring all pink and orange through the smog and palm trees.

Colleen GreenI Want To Grow Up