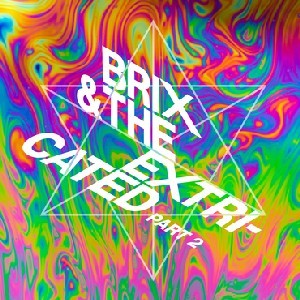 Brix & The Extricated release their highly anticipated debut album Part 2 on 22nd September following on from the early summer release of debut single Damned For Eternity. "Part 2 is a terrific debut album! While having elements of vintage Fall, Brix & The Extricated also bring the raw power of the Stooges, the pop sensibility of prime Blondie, walls of big glam rock guitars and dollops of psychedelia." Dave Simpson (Guardian). Formed by the visionary Brix Smith Start (vocals / guitar) and legendary bass player Stephen Hanley, Brix & The Extricated also features Paul Hanley on drums, which reignites the Hanley Brother powerhouse rhythm section. The addition of Steve Trafford on guitar has brought together these influential, former members of The Fall. Completing the line-up is hugely talented Irish guitarist Jason Brown. Increasing pressure from old and new fans alike to record fresh material spurred Brix & The Extricated to head into the studio, where they laid down 10 tracks. As anyone who has read Brix’s book ‘The Rise, The Fall & The Rise’ will know, Brix is a warrior woman one moment, and the next she’s stripping off her armour and laying bare her open wounds for all to see – and this is precisely what she’s done on the resulting album. Brix vehemently spits out her lyrics over savage sliding power chords over the distinctive Hanley brothers rhythm section.

Barry says: Channelling the delicate / loud balance of US grunge, with the perfect songwriting craft of a bloody great rock song, Brix & co. manage to take you on a thrilling but nuanced trip through these established sounds, and a whole lot more. Great stuff.