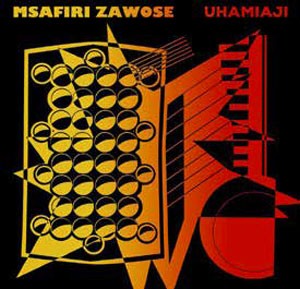 Rarely heard Tanzanian gogo music meets slick electronic production, for a borderless but powerful fusion sound. Tanzania’s Msafiri Zawose has been one of the biggest slept-on musical forces from the region, but all that is about to change with the imminent arrival of a new album that will redefine the boundaries of gogo music. The Wagogo people are Msafiri’s traditionally nomadic tribe from the center of the Tanzania, known for their musicality and made famous by Hukwe Zawose - Msafiri’s father, who toured the world as a part of Peter Gabriel’s Real World roster in the 80s and 90s. The album has been produced in collaboration with Sam Jones from Sound Thread, whose recent works with Orlando Julius and remixes for Mugwisa International and Sarabi have been rapturously received.
The tracks remain profoundly ‘gogo’ with traditional instruments and singing, but are infused with an organic electronic aesthetic. This is an afro-futurist journey that takes in dub, Balearic, ambient and electronic vibrations alongside Zawose’s hypnotic playing and emotive, plaintive vocals.

Patrick says: Hypnotic, percussive and trance inducing grooves from Msafiri Zawose here. Fusing traditional rhythms and melodies with buzzing synth bass, off kilter mallets and fx abuse, the Tanzanian musician has created a killer LP which should find favour with the more exotic fringes of the disco/Balearic communities.