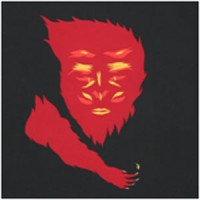 As their first release featuring songs written collaboratively by all three band members, it only makes sense that Honey’s sophomore LP New Moody Judy was recorded with the intent of perfectly capturing the dynamic, human energy that’s a vital component of their sound.

From the opening track, "Wage Agreement," – a song featuring a repeating blues lick framing verses that could either be about begging your boss for more hours or fighting with everything you have to not fall out of love – Honey make it clear that even with its ferocious riffs and careening rhythms, New Moody Judy’s message is one of empathy. “Through that front door / I’ll find anything but love” Dan Wise sings from the gut – what person hasn’t experienced the futility of trying to escape from a feeling like that. Equally relatable, if slightly more uplifting, is the message of the album’s first single “Dream Come Now”, an anthem to never giving up on your dreams even when they seem out of reach. Sonically, the song displays a new level of concision and brute heaviness previously known only to those who have seen Honey play live: the pummel and swing, the rave-ups and come downs -– the sound of perfect rock and roll, music always on the edge of spinning out of control.

From the tight jam giving way to a thrilling cascade of riffs that fuel the rush of "Hungry" to the ender-ender blowout of "Peggy Ray," New Moody Judy sees Honey giving everything to the music, and in doing so they create an LP that is meant to be felt all the way through. A band can't swing this heavy without heart, and New Moody Judy is about staying sensitized; about not numbing yourself to your relationships and the world around you even during the times that everything seems to be going to hell.