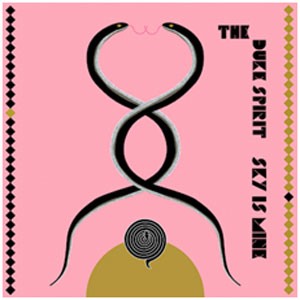 Following 2016's acclaimed album KIN and EP Serenade, The Duke Spirit march on with poignant new album Sky Is Mine. Produced by the band themselves, and mixed by Bruno Ellingham (Massive Attack), it also features guest vocals by long time friends Josh T Pearson (Lift to Experience) on the woozy How Could, How Come, and Duke Garwood on album closer Broken Dream. Each song approaches, revises, steps back and looks for humanity on a planetary scale. From the shimmering melodies and prodigious power of tracks like ‘Magenta’ and ‘See Power’ to the energy-fuelled psychedelic rock of ‘Houses’ and ‘Yoyo’, the album flows with a dark, beguiling grandeur with the majestic allure of Liela Moss’ crystal vocals. Sky Is Mine looks at Harm, Control and Lack of love but burns through it to find the essential human heart. Talking about the inspiration behind the album, front-woman Liela Moss explains: “With feet cold and wet from standing in the sludgy shit of rhetoric, illegitimacy and fear that is the world we tread upon, the album snapshots a palpitating love that bursts with, and values, Life. Half-finished sentences, which describe shards of arrogance, egomania and cruelty are dissolved by being pissed on from a great height with a stream of golden, glowing benevolence."

Barry says: Haunting reverbed guitars and swooning synths are laid out into languid carpets of sound before being joined by the unearthly, mesmerising vocals of Liela Moss. Like the best instrumental affectations of stunning post-rock but joined by the soaring majesty of a good vocal line. Brilliant.