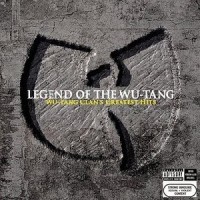 Legend of the Wu-Tang is a compilation album by the Wu-Tang Clan, released in 2004. It is notable for including the rare unedited version of "Protect Ya Neck", a remix of the song "Method Man" with alternate verses, as well as "Shaolin Worldwide", "Sucker M.C.'s" (a Run D.M.C. cover) and "Diesel", three tracks the Wu-Tang produced for soundtracks and compilations. The inside booklet can be unfolded to form a mini-poster of the group. Of course, it features Wu-Tang staples like "Shame On A Nigga", "It's Yourz", "Proect Ya Neck (The Jump Off)" and "Sucker M.C's". Wu-Tang's legacy continues to live on, often cited as one of the most influential hip-hop acts of all time. Pressed and presented beautifully, this is a wonderful chance to own clean copies of Wu-Tang's best joints, but also makes a perfect introduction to the newcomers who may be overwhelmed by their excessive catalogue. Cop a load of this and learn the code of the streets...