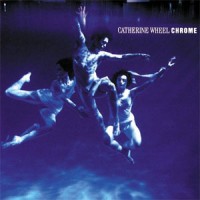 Long before groups like Oasis and Blur provoked cross-Atlantic media hype, Catherine Wheel were evolving the Britpop style that typifies the genre’s distinction. With the release of Chrome in 1993, they advanced their dreamy pop to the rock sound.

It’s not like Catherine Wheel established their sound with Chrome, either. Ferment [MOVLP1880] was considered their supposed magnum opus, with the extremely successful lead-single “Black Metallic”. Chrome is more appropriately described as a perfection of their established sound, as the band’s metallic shoegaze is refined in terms of both intensity and melodic-content. Every element that made Ferment so memorable and enjoyable is amplified in this release. Rob Dickenson sings with perfect tenor appeal on tracks like “Kill Rhythm” and “Crank,” highlighting the personal temperaments which shape the album.

There are quite a few album covers out there that flawlessly encapsulate the atmosphere and/or mood of the music contained. Chrome has one of those covers. It’s design came from the collective Hipgnosis, who gained international prestige for the cover of Dark Side Of The Moon by Pink Floyd.

Sit back, listen and experience this album. You might feel emotions you didn’t even know you had.