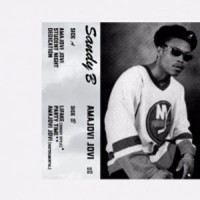 After taking a few months off to work their magic on the world's best festivals, Invisible City returns with the hotly anticipated reissue of "Amajovi Jovi" by Durban’s O.G. kwaito giant, Sandy B. Originally self-released on cassette and a white label 12”, rumour has it Sandy had to remake the tracks from memory because even he couldn’t find a copy.
In its original post-apartheid context, "Amajovi Jovi" was a sign of youthful subversiveness, rebellious creativity and a neck snapping rejection to the fascist groove of a silenced nation. While the Pantsulla hustler nods to house legends like Jamie Principle and Pal Joey, its hip hop breaks and interludes show a clear affection for Snoop Dogg’s "Doggystyle". At its slowed down tempo however, this low-fi kwaito masterpiece turns away from its American influence and looks towards Baldelli and his cosmos. Best of all are Sandy’s vocals - deep, melodic Zulu rap, sung flippantly- the way that only a true gangster could. It now stands as one of the finest glimpses of 90s party music to ever be blasted at the underground parties of the South African townships.  A huge fave of Jamie Tiller, Tako and all the forward thinking jocks, now's your chance to grab a copy of this kwaito classic, remastered and restored from the original cassette tape.

Patrick says: Landing bang on trend, Invisible City's latest reissue spectacular is this full on floor filler from kwaito legend Sandy B. Fusing the fat booty of US house, g-funk's lascivious vibe and the slow tempo which was synonymous with kwaito, this holy grail is well deserving of its legendary status. Don't miss out!