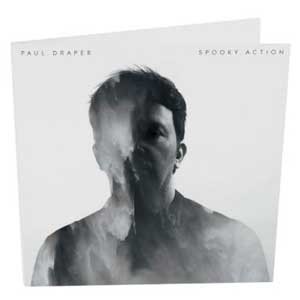 As the frontman and songwriter of one of the most iconic bands of the late '90s, the creative force that brought the classichit single "Wide Open Space" and the Number 1 album Attack Of The Grey Lantern with Mansun, Paul Draper's talent preceeds him. Mansun's four albums launched the band in to a fervent cult following that has grown and holds an annualconvention in the UK in the band's name. 2016 saw Draper's triumphant return with two new EPs to set the Mansunfandom aflame, including industry gatekeepers Steve Lamacq and Chris Hawkins for BBC 6 Music. He was supportedfurther with playlisting on Radio X, a Q Magazine Track Of The Day, NME Track Of The Week, a feature from The LineOf Best Fit, and an exclusive remix from Public Service Broadcasting.

Taking its cue from the two EPs and recorded in collaboration with Catherine AD (The Anchoress) and long timeMansun collaborator P Dub, the record’s eleven tracks also veer through genres, from the warped, razored rock'n'rollin "Grey House" to the glorious widescreen analogue pop of "Jealousy Is A Powerful Emotion". SpookyAction represents Draper's strongest, most consistent set of songs to date – a lifetime’s work condensed into just over an hour of perfectly formed music.

Don't Poke The Bear
Grey House
Things People Want
Who's Wearing The Trousers
Jealousy Is A Powerful Emotion
Friends Make The Worst Enemies
Feeling My Heart Run Slow
You Don't Really Know Someone, Til You Fall Out With Them
Can't Get Fairer Than That
Feel Like I Wanna Stay
The Inner Wheel