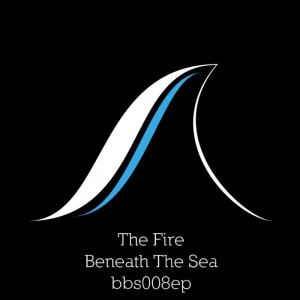 It's always a great day when Black Beacon Sound bring us some new records for sale, and we have a few belters this time. 'BBS008EP' comes courtesy of The Fire Beneath the sea, smashing out a heady mix of hip-hop, horn-led ska and funk. 'Hips Go Wild' kicks off with a calypso rhythm, before being quickly joined by a frantic bass lick and snappy horns, before the frantic vocal flourishes expertly ride over the top of the rapidly eclectic instrumental. It's a journey lurching from skittering vocal hip hop into a half-speed solemn redux of the original riff before coming back once again, bursting with every bit of the original energy.

Flipside, 'I Am' showcases the brilliantly effervescent vocal athletics this talented bunch are capable of. Snappy vox, brilliantly clever lyrics and funked up to the max. There's some hugely talented turntablism going down in the breakdowns too, this one just keeps moving until the end, making it feel much more epic than it's short four minute length. A killer duo, and antoher winner for BBS.

Barry says: It's hard not to move your hips when this one gets going, reminiscent of old-school hip-hop, with snappy ska horns and body-shaking rolling basslines. They are many in number this bunch, but all of the skill going on makes it seem unbelievable there could be any less than 100 people at the helm (there is less than 100). Either way, it's ace.