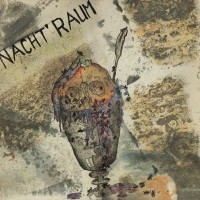 Continuing their rich vein of form, Mannequin Records present a LP compilation of Michael Antener (Swamp Terrorist) early 80's minimal synth/industrial projects Nacht'raum (with Michael Stämpfli) and, as solo, Bande Berne Crematoire.
Heavily influenced by the works of SPK and Nocturnal Emissions, Michael Antener made his first recordings in the basement of his parents house in a small village nearby Bern, Utzensdorf. He started BBC in 1980, a hybrid of Neue Deutsch Welle and noise/experimental, making a household name in the international home recording scene of the time and participating to many tape compilations.
Teaming up with Michael Stämpfli as Nacht’raum, he self-released the untitled mini-lp in 1983. Coming out from the same town of Grauzone, the duo moved into the darkest minimal electronic sounds, choosing German as main language for the lyrics and a Roland Tr-808 as main drum machine, bringing the sound to a proto-electro dimension. Nacth’raum will be historically a real gem in the 80's Swiss underground electronic music, together with Mittageisen, Grauzone, Liliput, The Vyllies.
Michael, by the way, later teamed up with Ane Hebeisen and they went by the name of Swamp Terrorists, releasing seven albums and touring throughout the world until the end of the nineties. At the end of the nineties he sold all his instruments and became independent as a graphic artist.