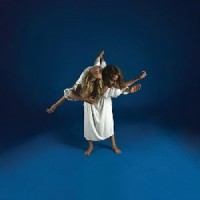 “Gone” b/w “You’re Gonna Make Me Lonesome When You Go” is the ﬁrst new release from My Bubba following last year’s acclaimed Big Bad Good. The Scandinavian folk duo – Icelander Guðbjörg Tómasdóttir (a.k.a. Bubba) and Sweden’s My Larsdotter – formed in 2013 and have since concocted a soulful, unadorned sound all their own utilizing little more than the basic elements of warm harmonies, acoustic guitar, and the Norwegian lap harp known as a cittra. Big Bad Good, My Bubba’s latest full-length release, was produced in Brooklyn by Shahzad Ismaily (Will Oldham, Jolie Holland), with its songs written and recorded almost immediately as they were written.

While their prior work was recorded almost entirely as a duo, “Gone” sees My Bubba joined in Third Man Studios by a backing combo comprised of bassist Jack Lawrence, keyboardist Dean Fertita, and legendary Nashville drummer Whip Triplet.

“Gone” is the A-side and the ﬁ rst of their songs written on a century-old lap harp, which was procured from an old boyfriend’s attic. After breaking up, My Bubba wrote this song about the old lover on the lap harp.

On the B-Side, a cover of Bob Dylan’s “You’re Gonna Make Me Lonesome When You Go” serves as one of the ﬁrst songs the duo ever sang together in Copenhagen. They still play it most evenings together on the road.
Tracks recorded with producer Jack White III at Third Man Studios

1.Gone
2.You're Gonna Make Me Lonesome When You Go