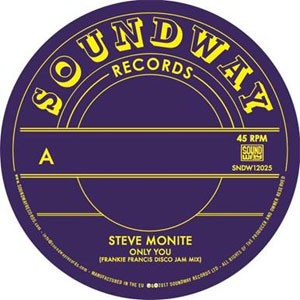 The ever-reliable Soundway come more than correct this week with a vinyl only DJ 12" featuring two mega re-edits of GIANT Afro dancers from Steve Monite and Tabu Ley Rochereau. Now a firm favourite in many a DJ's record bag, Nigerian disco-boogie king Steve Monite's hit "Only You" (featured on Soundway's recent "Doing It In Lagos" compilation), is given a rework by Sofrito's own Frankie Francis. Frankie switches up the arrangement, boosts that pinging bassline and adds a little extra club thwomp to deliver a definitive dance floor mix of this Afro-disco bomb. Sublime synthlines, impassioned vocals and insane space echo fly at you from all sides as this masterpiece unites the club in bass-led ecstasy. On the B-side, Nick The Record teams up with Idjut Boys' Dan Tyler to take on "Hafi Deo" - a beautiful taste of breezy tropical Congolese pop from Tabu Ley Rochereau. Dubbing out most of the vocals, tweaking the arrangements and adding the requisite amount of tape delay, Nick and Dan reshape this proto-house scorcher in time honoured fashion. Imagine hearing Boyd Jarvis and Shep Pettibone back to back in a Congolese jungle - ace!