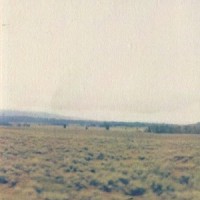 The album title seems to refer to the contrast between what our elders tell us and the perspectives we form out of our own experiences. There's a vacillation between idealism and realism, and it expresses itself musically in the hairpin turns from gentle folk into brazen experimental flourishes, like on “Funeral Potatoes.” The track opens with lilting, somber, Satie-esque piano, but at the halfway point, typical choices of song structure and transition are discarded in favor of a screeching, static-washed loop of violin and feedback that transcends the formality of songcraft, becoming something altogether more daring and collage-like.

The more band-driven songs on 50 Million recall an early-1990’s style of production in the way chorus-twinged electric guitars and tight, papery drumbeats point our mind’s eye to the West Coast sunset, like on the mid-album standout “Gravy Days.” Sallee decorates the background of most songs with hushed humming that could stand alone as a minimalist-ambient choral album, and when employed on her songs, elevates the ¬final product to an astral level. Sallee’s gift lies in pitting the familiar against the unexpected with a delicate assuredness, never compromising the one for the other. These kinds of debuts can sometimes feel like an over-promise of what is to come, but in the case of Caroline Says there's clearly plenty more thread to be unraveled. It'll be a pleasure to see where the next bus ride takes us.

Belle And SebastianFold Your Hands Child, You Walk Like A Peasant